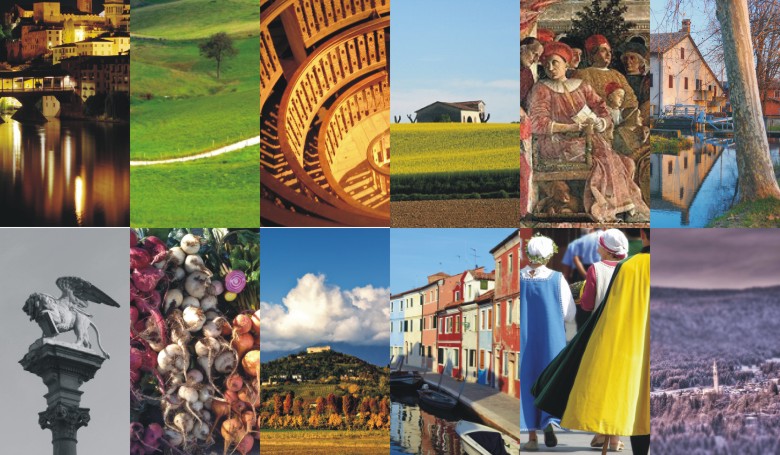 The Veneto region is a unique territory where sea, plain and mountain meet to create a unique and enchanting landscape, that stretches from the Po river Delta – the “Camargue” of Italy – to the Dolomites, UNESCO World Heritage, across the lovely Venetian Lidos, the sunlit farmed plains and gentle hills around Padova, Verona, Vicenza and Treviso, covered in woods and vineyards. Thanks to its favorable position and climate the very first Veneto inhabitants settled here already in the 6th-century BC and founded places that would later turn into picturesque villages and important cities of art and science. Its history is definitely linked with that of a city, built on a patchwork of more than a hundred low-lying islands, which became a powerful Sea Republic and for more than a millennium ruled this land and influenced nearly all the Known World.

Touristinveneto.it is not a travel agency, but rather our showcase. TOURISTINVENETO promotes the historical, artistic and naturalistic heritage of the Veneto region. Our tours created for groups or individuals are available in various languages: English, German, French and Italian. We offer both classic tours to the most renowned places, such as art cities, museums, exhibitions, naturalistic areas, and off-the-beaten-path or tailor-made itineraries. You will discover with us the most picturesque places. Our qualified local guides have got a wide and up-to-date knowledge of this territory, which they are happy to share with their visitors.

TOURISTINVENETO can also organise educational activities, either cultural or naturalistic, for schools, institutions, associations or individuals that would like to improve their knowledge in this field. Its main goal remains though the promotion of the Veneto territory heritage.